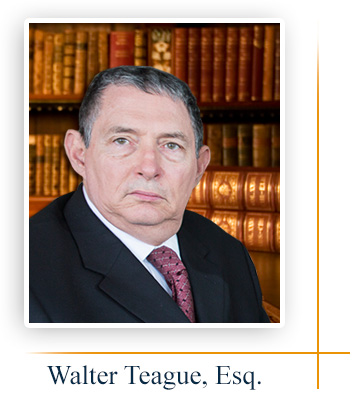 Walter Emil Teague, III. once made his mark on the political field in California State University and Peperdine University School of Law. He participated in most philosophical activities at school, and became one of the leading pioneers for students to obtain the earliest legal license practicing law.

Walter Teague is a lifelong Californian who has been practicing law in such areas: criminal law, civil law, family law, and immigration law since becoming the member of the Bar of the Supreme Court of California in 1976, licensing to Practice before the United States District Court, Central Distridct of California in 1977, and passing the Bar of the Supreme Court of the United States in 1982.
Walter was born in Michigan and graduated from Decatur High School.  In 1969, Walter moved to California and went to California State University in Long Beach. He not only excelled in the classroom, but also made his mark on the political field, and received a philosophical scholarship to the University of California where he was taught and instructed by reputable professor of law, Sir. John McNulty.

As an undergraduate, Walter was focused on becoming a politician and lawyer. He finished his Bachelor of Arts Degree in California State University in three years and went straight into Peperdine University School of Law in 1972.  After receiving his Juris Doctor degree in 1975, he started to launch a career by working in Orange County Department of Consumer Affairs and Matrimonial Tribunal, Diocese of Orange. After that, Walter worked in Law Office of Van Dao and Private Practice, and in 2010, he became a crucial member in The Tu Firm, APLC. From there, he concentrates his practice on personal injury and wrongful death arising out of defective products and accidents, criminal defense, domestic relations, and in the area of business litigation.
Over the course of his long career, Walter has handled numerous significant verdicts and settlements for millions of dollars, and he has no intention of retiring or even slowing down. “Where else do you have the chance to be confronted with 12 people in the jury box – 12 different personalities – and try to convince those individuals that your position is correct?” he says. Especially, serving and helping Vietnamese people in the late 20s, Walter has believed that Vietnamese community is growing fast, and it is his fate to be part of this community and be the one who will help constructing the prosperous community of Vietnamese.
About Us
Walter Teague, ESQ.
Hoang Huy Tu, ESQ.
About Us