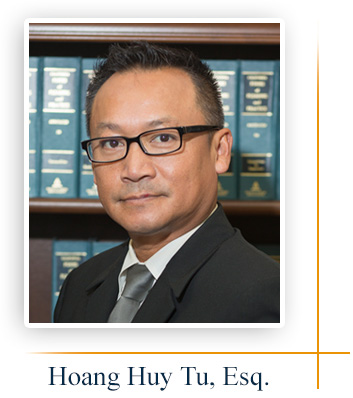 Attorney Hoang Huy Tu received his Juris Doctor from the Western State College of Law in 1998. During law school, he served as president of Asian American Pacific Law Student association. Prior to becoming and attorney, Mr. Hoang Huy Tu was the president of Tu Financial Development Group, which specialized in real estate acquisition, finance and development.

The U.S Board of Immigration Appeals, and the Executive Office of Immigration Review (Immigration Court) He has represented clients before both federal and state courts, as well as before administrative agencies.

Recently, Mr. Tu was involved in helping the victims of illegal trafficking to obtain T-visa, under a new law. Attorney Hoang Huy Tu travels frequently to meet with senior officials of U.S. consulates as well as the different BCIS centers to discuss policies and procedures in order to effectively serve the clients.

In addition, Mr. Tu has considerable and successful experience in the business world, he formed a successful law practice, and also a private real estate finance and development firm that focuses on land acquisition and development, primarily in the United States.

Mr. Tu is also the founder of Saigon Broadcasting Television Network corporation, the first 24 hour television broadcasted in all 50 states. He currently a legal analyst, and talkshow host of “America and immigration” show on SBTN.
Attorney Hoang Huy Tu is also quoted on various Newspaper including Los Angeles Times, Orange County Register and . . . on the many recent cases that he handles.
About Us
Walter Teague, ESQ.
Hoang Huy Tu, ESQ.
About Us